Rinse char inside and out with cold water. Pat dry with paper towel and place fish into a large container. Pour wine over fish, turning to coat. Cover and refrigerate for 60 minutes, turning once.

Preheat grill to medium heat. Remove char from fridge; discard wine. Place cinnamon stick into the cavity of the char. Add a sliced shallot and a sprig of rosemary to the fish; set aside.

Close grill lid and bake for 30 minutes, turning once but checking occasionally to ensure that cinnamon sticks are not on fire. Fish is fully cooked when firm to the touch but flesh along the backbone flakes easily when pierced. 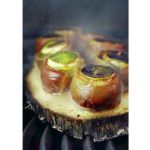